The stem  or rhizome is the part of a fern from which the fronds (leaves) and roots grow.

The rhizomes can be very variable: from short & thick to long creeping & wiry, from differently branched to unbranched. It can be hidden underground as is often the case with terrestrial ferns, or it may lay clearly visible on top of the soil or trees as it often does with epiphytic or lithophytic ferns.

If an underground rhizome emerges above the ground and forms a woody trunk - like stem, we call this a caudex . Treeferns are well known examples of ferns that posses a caudex. Apart from tree ferns there are other larger fern species that also develop a caudex with age (Blotiella spp., Marattia fraxinea)

The fronds are the leaves of a fern, consisting out of 2 parts: the stipe and the lamina.

The part between the rhizome and the first leaflet is called stipe, it is analogous to the petiole of a leaf.

The lamina is the blade of the fern, it is usually green and responsible for the photosynthesis. The lamina consist of a midrib (rachis) and of pinnae.

A pinnae is the first division of the front, this can be further divided into pinnules. 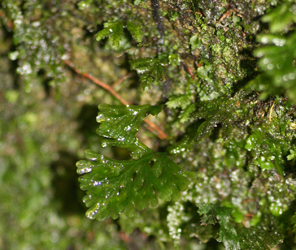 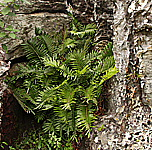 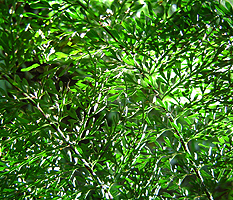 Fronds are very variable. They can be  minute to extremely large. If the frond is undivided it is called simple, once divide pinnate, twice divided bi-pinnate, and so on to quadripinnate.  If the divisions are not complete they are called pinnatifid.

An easy way to recognize a fern is the rolled up state of the young leaves (fiddleheads or croziers), a condition better known as circinate vernation. 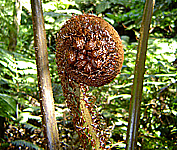 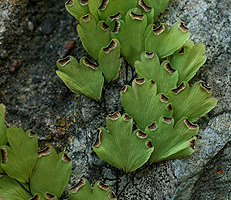 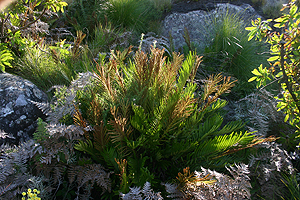 Fronds can be sterile or fertile. In monomorphic ferns the sterile & fertile fronds have the same shape; in dimorphic species  the sori are located on a differently shaped fertile frond. The genera Anemia, Osmunda, Blechnum and Schizaea are well known examples of dimorphic ferns.