In the plant kingdom we find a major division of vascular, spore bearing plants, called the Pteridophyta (ferns & fern allies).

In evolutionary terms the Pteridophyta are put in between the Bryophyta (mosses and liverworts) and the Spermatophyta (seed-bearing plants). The Pteridophyta differ from the Bryophyta by the development of a vascular system , they contain elongated cells in the stalks for the transport of water and nutrient solutions. They differ from seed-bearing plants by the absence of flowers and by the production of spores. 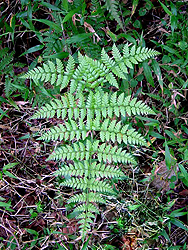 Ferns and Fern Allies do not have flowers. They reproduce through spores, which are produced in sporangia. In true ferns these are situated in groups, called sori. These are usually located on the underside of the fronds. In the fern allies they are born on specialized, small leaves called sporophylls. In some, these sporophylls are crowded into cone-like structures called strobili.

With about 12000 species divided over more then 230 genera, the pteridophytes are a significant group in the plant kingdom. Classification of such a big group is not easy and different systems are in use. In a simplified system, the pteridophyta are further subdivided into five classes. The Polypodiopsida and Marattiopsida have large leaves known as megaphylls. The fern allies (divided into Psilotopsida, Lycopodiopsida and Equisetopsida) on the other hand have minute scale-like structures called microphylls or grass-like, linear leaves, as in the genus Isoetes.